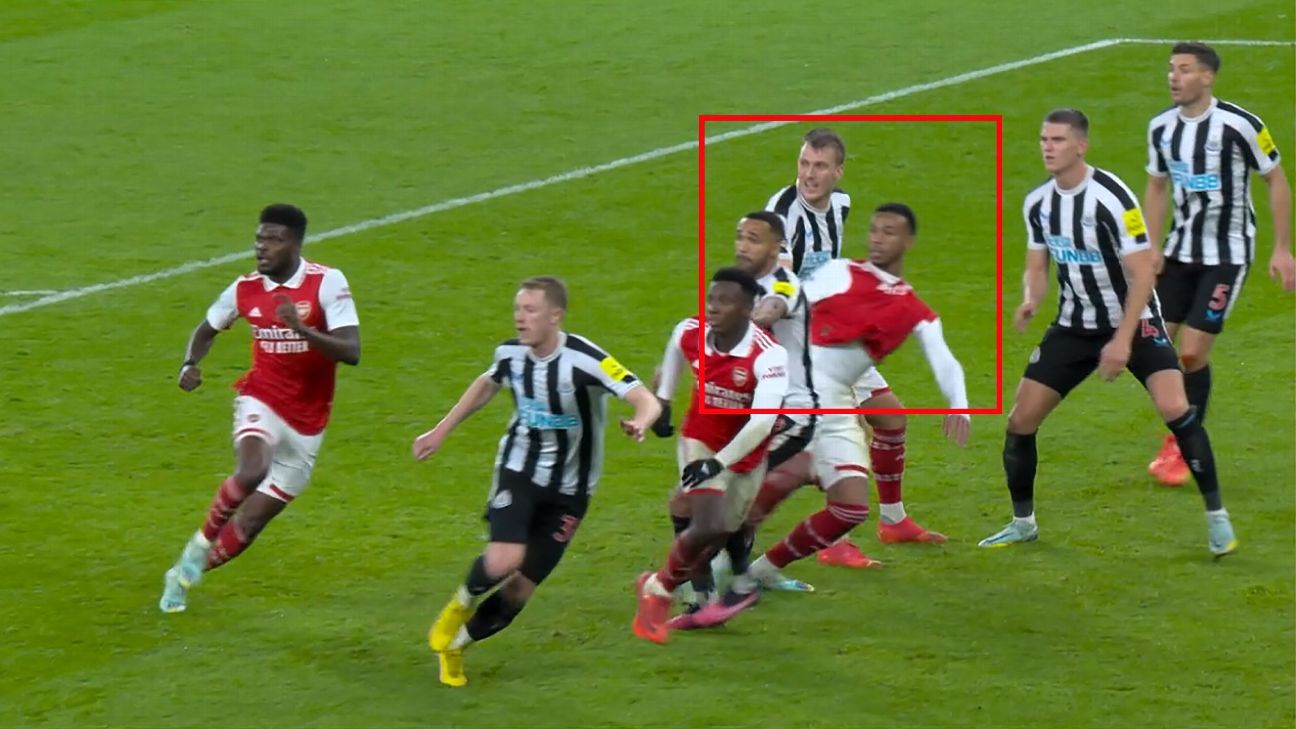 Video Assistant Referee causes controversy every week in the Premier League, but how are decisions made, and are they correct?

After each weekend we take a look at the major incidents, examining and explaining the process both in terms of VAR protocol and the Laws of the Game.

– How VAR decisions affected every Prem club in 2022-23
– VAR in the Premier League: Ultimate guide

What happened: In the 59th minute, Bukayo Saka delivered a free kick from the right flank, which was punched clear by Nick Pope. Gabriel went down under a challenge from Dan Burn, but referee Andy Madley took no action and the game continued.

VAR review: For a holding offence, the law asks if “contact with an opponent’s body or equipment impedes the opponent’s movement.” Burn almost pulled Gabriel’s shirt round, so there’s a clear argument for a penalty, but was the VAR, Stuart Attwell, wrong not to get involved?

When does the pulling of the shirt turn from normal football contact into a foul? And do referees often look for too much contact for a penalty? FIFA tried to address this during the World Cup, for the group stage at least, with some success but still with questions over consistency.

Shirt pulling is rarely looked at by the VAR; holding with both arms around the attacker is taken more seriously. Of the 15 penalties awarded following a VAR review in the Premier League this season, seven have been for handball, seven for a foul when playing for the ball and only one for any kind of holding offence — when Wolverhampton Wanderers’ Matheus Nunes dragged down Nottingham Forest’s Ryan Yates.

New refs chief Howard Webb wants most decisions to stay on the pitch, but he also wants video referees to have the courage to intervene if they feel there has been a foul. A referee describes what he has seen, and the VAR then takes this into account when watching the replays. For a situation like this, the VAR has to ask if the referee’s assessment of the holding is fair, or is it clearly wrong?

Judging whether or not an attacking player has actually been impeded isn’t easy, which is why often these calls stay on the pitch — unless there is a truly blatant offence. Last week, we saw AFC Bournemouth defender Adam Smith tug on the shirt of Christian Pulisic before the Chelsea forward took a shot, but there was no VAR intervention.

Lee Mason is the only VAR to award a penalty for any kind of holding, but the five-man independent panel says he did also miss a penalty for shirt pulling. Six weeks before the Nunes-Yates incident, Mason decided not to advise a review when Nunes held onto the shirt of Newcastle United’s Sean Longstaff inside the area.

It’s 50-50 whether the panel says Attwell should have awarded a penalty against Burn; it may not be enough to be seen a clear and obvious error.

What happened: Deep into added time, Granit Xhaka tried to cut a cross into the box from close to the by-line, the ball hit Jacob Murphy and Arsenal players furiously surrounded referee Madley demanding a penalty.


VAR review: An easy decision for the VAR this time, as it certainly wasn’t a penalty.

The ball hit Murphy’s left arm, which was tucked into his body.

If it had hit the Newcastle United player’s right arm, which was raised and could be considered to be creating a barrier extended away from the body, it may have been a different outcome. Even so, the proximity between Xhaka playing the ball and it hitting Murphy would have been a factor.

We can compare this to example at the World Cup, when the ball hit the arm of France defender Dayot Upamecano against Poland. Here, the ball hits Upamecano’s outstretched arm rather than the one tucked into the body.

What happened: Brentford took the lead in the 19th minute when Ibrahima Konate diverted a corner kick into his own net. There was a VAR check for a possible handball by Ben Mee.


VAR review: This wasn’t disallowed because it was an own goal by Konate; accidental attacking handball only applies to the goal scorer. Had the ball gone straight into the goal after hitting Mee’s arm, it would have automatically been disallowed. It’s the same as the ball hitting Aleksandar Mitrovic’s arm before Tim Ream’s goal for Fulham at Crystal Palace on Boxing Day.

Mee’s handball would have to be deliberate, or his arm would have away from his body in an unnatural position.

It took the VAR, Darren England, more than 1½ minutes to confirm the goal, which is perhaps too long when it did seem to be a clear own goal by Konate.

What happened: Brentford thought they had a second goal in the 26th minute when Yoane Wissa scored from close following a corner routine, but the assistant’s flag immediately went up for offside against the striker.


VAR review: A great spot by the assistant from a scramble inside the box which involved several plays of the ball.

When Ethan Pinnock heads towards goal, Wissa is stood off the pitch; Alisson then makes a save and Wissa mops up the loose ball to score.

Though Wissa (and Liverpool defender Trent Alexander-Arnold) is off the pitch, for the purposes of offside he is deemed to be on the goal line. So Wissa and Alexander-Arnold are level, but there needs to be two opposition players between Wissa and the goal for him to be onside.

What happened: In the 39th minute, a corner was played deep to Wissa at the back post, who chested the ball down and saw his shot deflect into the far corner. The assistant kept his flag down, but there was a VAR review.


VAR review: Another review which took 90 seconds, though this time the offside lines did need to be drawn.

If the ball did flick off Konate just before it hit Mee it wouldn’t make any difference to the decision, as the Liverpool defender’s actions would not be a “deliberate play” to reset offside. 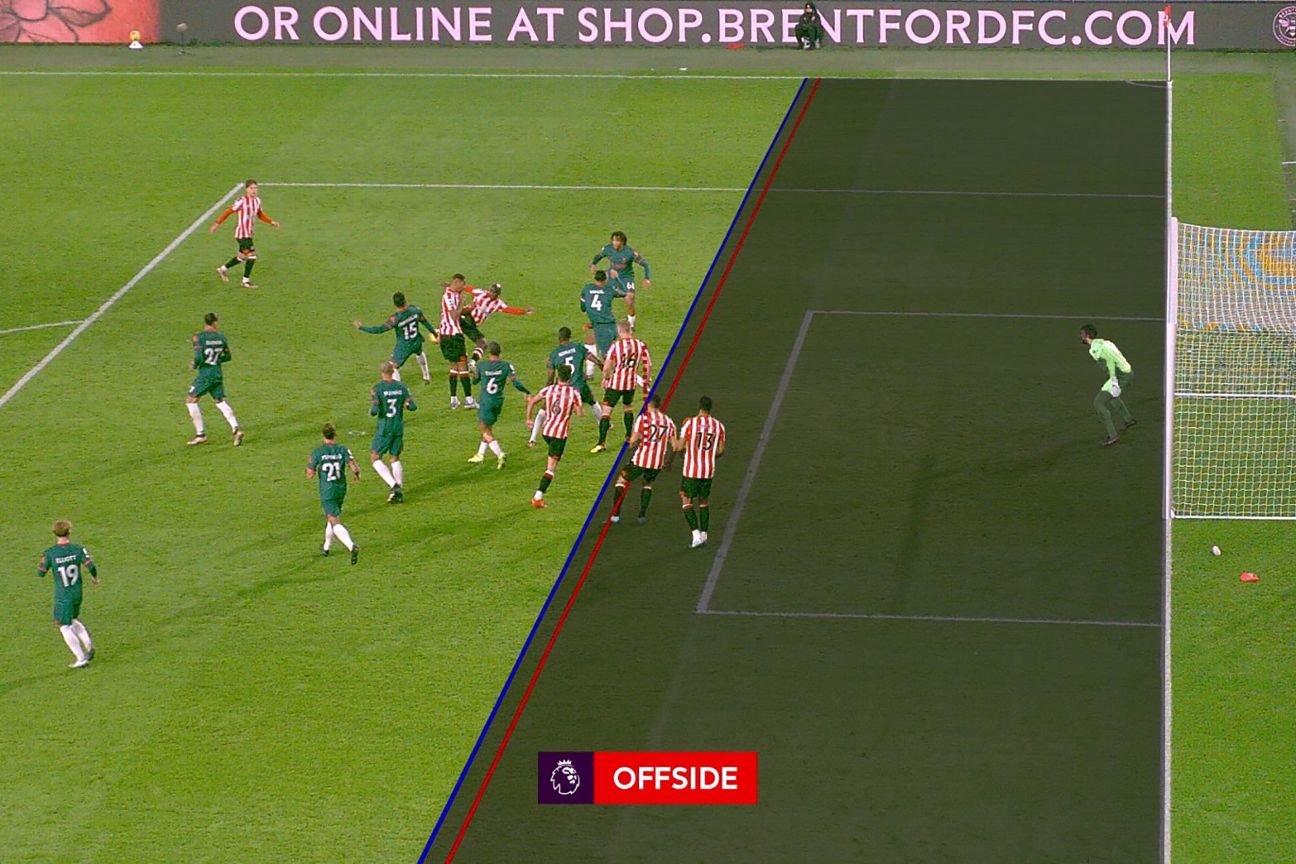 What happened: It looked as though Darwin Nunez had brought Liverpool back into the game when the Uruguay international raced onto Thiago’s ball over the top and scored, but there was a review for offside.


VAR review: One of the more obvious VAR offside decisions of its type, with the Liverpool striker looking offside from the first replay and there being a clear gap between the offside lines. The lean of the players can be misleading from the camera angle; the correct Brentford player was used. 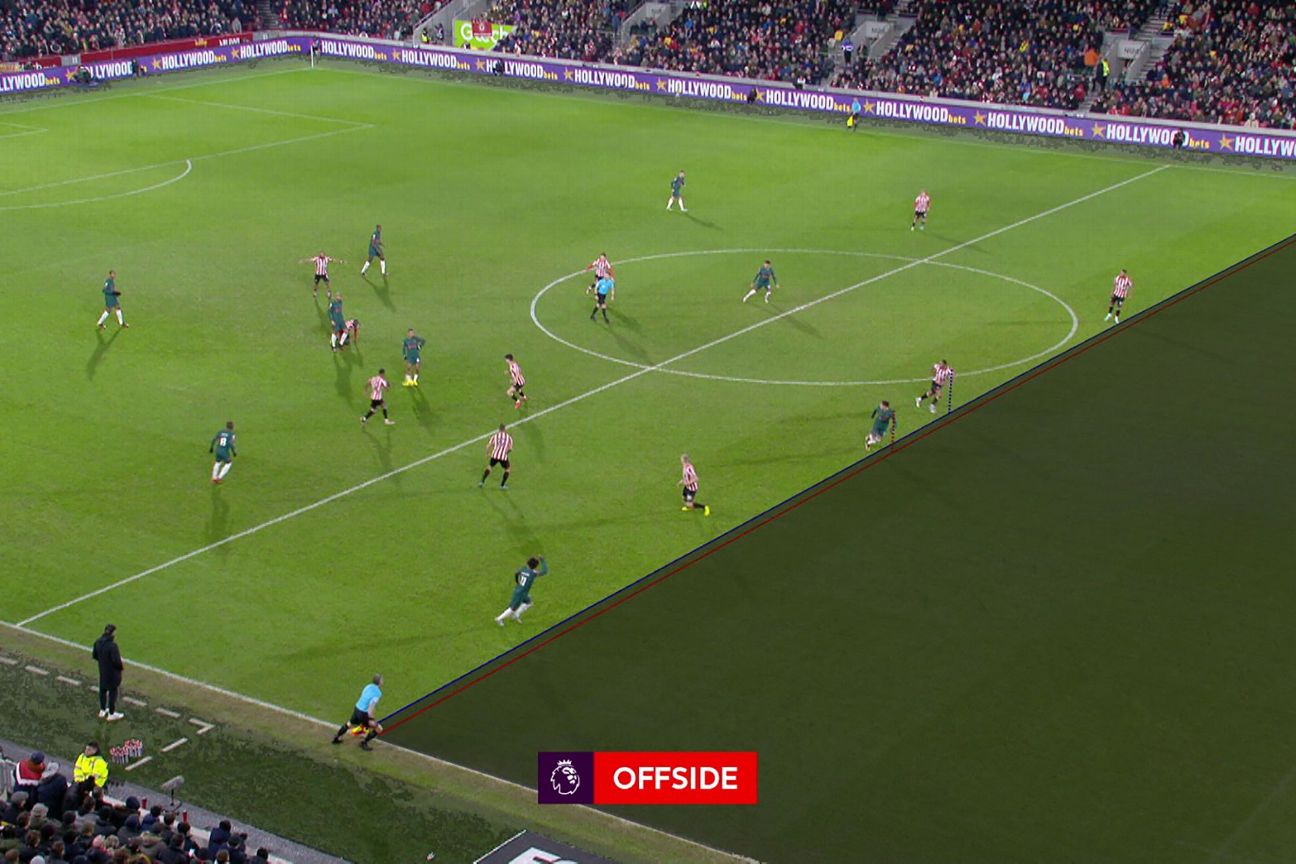 What happened: Brentford scored a third goal in the 84th minute when Bryan Mbeumo chased a long ball through the centre, muscled Konate off the ball and calmly finished past Alisson. But did Mbeumo foul the defender to win possession on the edge of the area?


VAR review: It’s the kind of incident that more often than not you may see a referee give as a free kick, but if he has deemed the contact not to be a foul the VAR is unlikely to get involved with the high bar for intervention.

Mbeumo challenged the Liverpool defender shoulder to shoulder and without excessive force, so there wouldn’t be enough in it for the VAR. If the Brentford forward challenged with his shoulder into the back of Konate, that would be considered a foul; players are allowed to challenge for the ball shoulder-on-shoulder.

We saw a similar incident in October when Erling Haaland scored for Manchester City against Brighton & Hove Albion. The striker had used his upper body strength to win the ball off Adam Webster, and the VAR didn’t intervene.

What happened: In the 42nd minute, Bournemouth were on the attack on the edge of the box when Marcos Senesi tried to play the ball out wide. As he was about to kick it he slipped into Donny van de Beek, who was forced off injured.

VAR review: The VAR, Craig Pawson, must ask himself if Senesi endangered the safety of an opponent when he made the challenge. That the Bournemouth player wasn’t actually trying to make a tackle and slipped in the process of passing the ball means there is no chance of a red card.

Van de Beek is exceptionally unfortunate that he was injured as a result of the collision.

There could be a red card in this situation if the player had raised his foot high to catch an opponent, rather than it purely being the players coming together as a result of the slip. Senesi slipped into Van de Beek and their legs came together; there was high boot or studs which made contact.

What happened: In the 83rd minute, Jack Stacey attempted to challenge Alejandro Garnacho for a looping ball inside the area but toppled over the top of the Manchester United player, and the ball hit his hand.

VAR review: The handball law states that the referee and the VAR should always take into account the expected arm position for a player’s movement. Stacey was using his arm, which was pointed to the ground, for balance and could not be expected to get it out of the way of the ball.

No penalty was the correct decision.

What happened: West Ham were on the attack in the 44th minute when Jarrod Bowen went to ground up against Pascal Struijk. Play continued and Pablo Fornals shot wide, referee David Coote pointed for a goal kick.


VAR review: The key to this decision for the VAR, Paul Tierney, is that Coote didn’t play advantage; if he had done, the foul would have been identified in the game and managed at the time — play has continued with no penalty.

As Coote didn’t judge Struijk on Bowen to be a foul, that opens up scope for the review for a penalty.

There’s no doubt that Bowen gets to the ball first and is then caught by the Leeds United defender — a good VAR decision.

What happened: In the 75th minute, Ludwig Augustinsson crossed from the left wing and when Wolves defender Hugo Bueno tried to clear the ball it bounced up onto his outstretched arm.


VAR review: An easy decision for the VAR, Simon Hooper. When a defender is deliberately trying to play the ball and it goes up onto their arm, they should not be penalised for handball.

The logic is that if a defender does have their arm away from the body when playing the ball, it cannot be to gain an advantage as their intention isn’t to use the arm.

What happened: In the fifth minute with the game goalless, Tom Davies tried to head the ball across the box, and it hit the arm of Lewis Dunk; referee Andre Marriner allowed play to continue.

VAR review: At the start of the season we saw an incorrect VAR penalty when Aston Villa’s Lucas Digne was penalised when the ball hit his arm, even though it was at close proximity with the player having his back turned.

This is a very similar situation. Even though Dunk has his arm outstretched, it is both in a justified position having jumped, not above shoulder height and at short distance. A good decision from the VAR, Michael Oliver.

Information provided by the Premier League and PGMOL was used in this story. 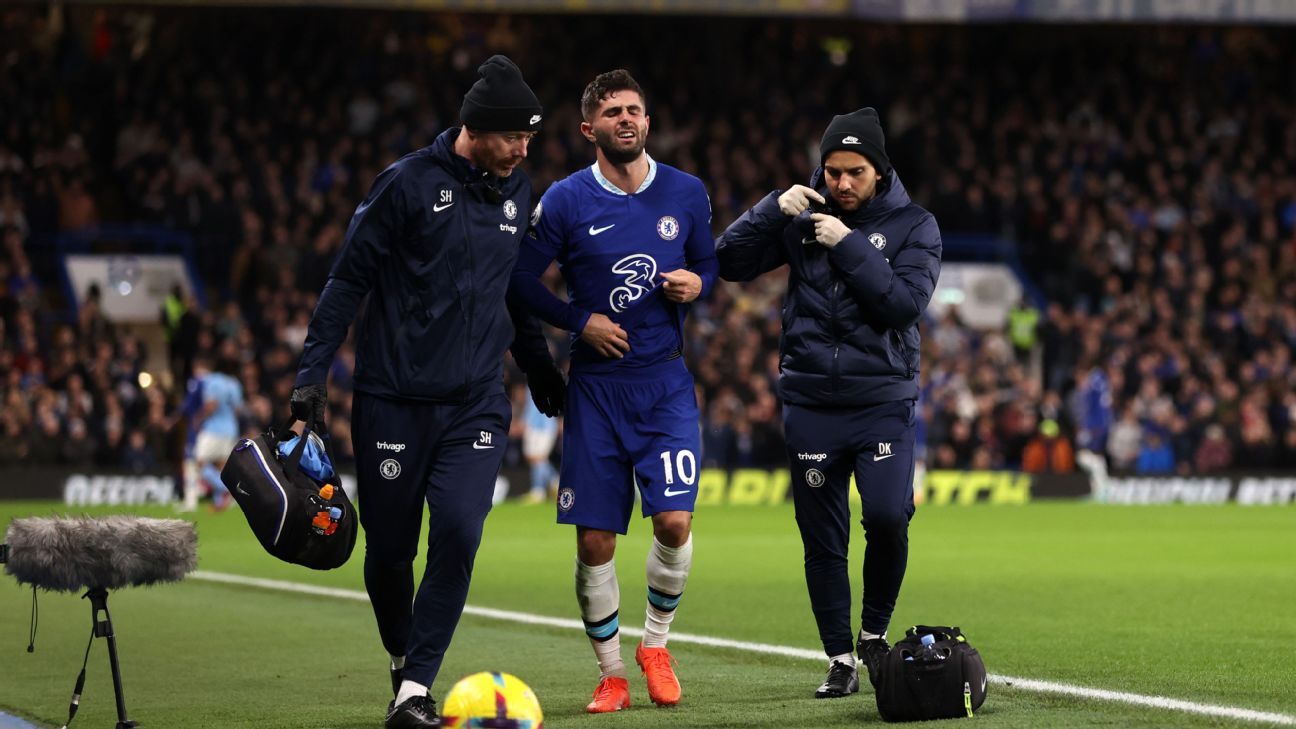